Manon de Roey won the Ladies European Tour Access Series and WPGA International Challenge at Stoke by Nayland for the second year running and in doing so brought to mind waiting for a London bus. Just when all hope of one arriving has been abandoned, two or three turn up in quick succession, which is the case with the 27-year-old Belgian when it comes to winning tournaments.

Her victory at Stoke by Nayland Hotel, Golf & Spa 12 months ago was her first as a professional and ended a three-year wait. Since then she has won two more tournaments: the Santander Golf Tour LETAS Valencia in July and again at the Suffolk resort. 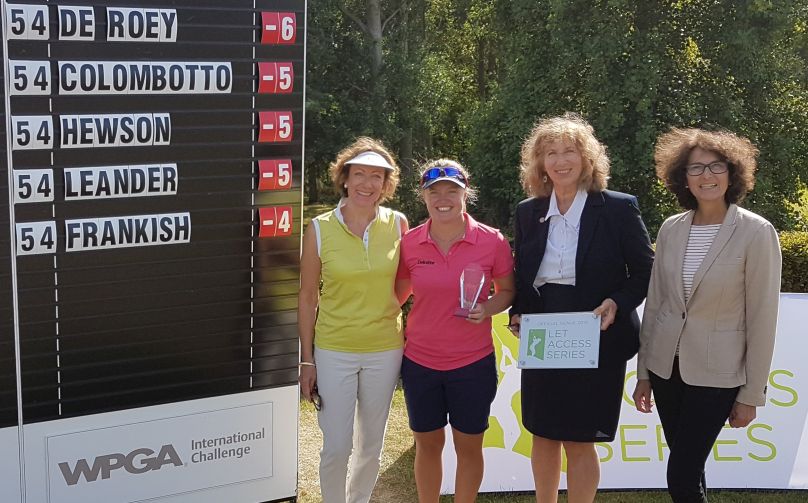 “Once you’ve had your first win you know you can do it,” she said after posting a six-under-par score of 210 for the 54-holes. “It’s definitely a weight off your shoulders. I won in Spain a couple of months ago and winning here is special because I won here before.”

Her latest conquest of the Gainsborough course was slightly less stressful than last year’s event. That was settled by a sudden-death play-off with Lydia Hall, the defending champion. This time, by contrast, De Roey could afford to bogey the final hole and still claim the €5,600 first prize. She finished a shot clear of the trio sharing second place: My Leander of Sweden, Italy’s Lucrezia Colombotto Rosso and Alice Hewson of England.

De Roey ’s victory meant she became the first to defend the title successfully since the tournament began seven years ago and, by definition, win it twice. Now, with another win behind her, she is focusing on retaining her Tour card. “There are three LET tournaments coming up – starting in Bordeaux next week, then Barcelona, then India,” she added. “Winning here has given me a good feeling for next week.”

Manon sinks the winning putt on the 18th Gainsborough

The venue, which enjoys a stunning location in an Area of Outstanding Natural Beauty and has two championship courses, hosted the country’s first England Disability Open Championship the previous weekend. Over 40 top disabled golfers from all over Europe displayed brilliant skills during the two day event which was featured on BBC Look East TV news.

The week after the WPGA Challenge, which was the 7th year of hosting this event, Stoke by Nayland will see more international golfing prowess when the mens’s European Tour returns to the renowned resort to stage its Qualifying Rounds.

Managing Director of Stoke by Nayland, Susanna Rendall said, “We are delighted to be hosting these international events here and it is wonderful to see such an excellent standard of golf on our courses which visitors come and watch free of charge. However, we would not be able to hold these events without the valued assistance from the dedicated golf members here and other volunteers who work tirelessly on the courses with scoring, ball spotting and other roles, which all helps to make them run so smoothly.”