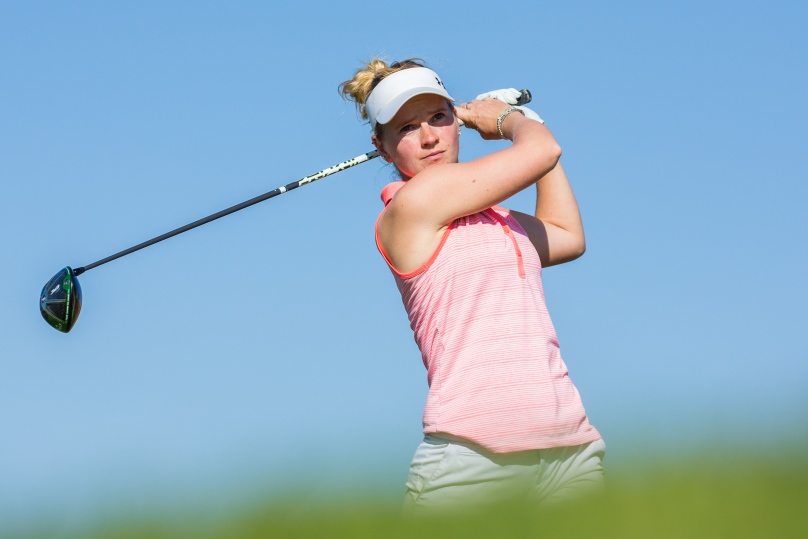 With three tournaments of the LET Access Series season to go, the contest to be crowned Number One is running right down to the wire heading into next week’s WPGA International Challenge at Stoke by Nayland Hotel, Golf, Spa & Lodges on the Suffolk/Essex border near Colchester.

The award-winning, family-owned Stoke by Nayland venue provides an idyllic Constable Country setting for the tournament and spectators are welcomed to come and watch top quality international golf on all 3 days of the event free of charge. Play will begin at around 7.30am on the 12th and 13th and end at around 6pm, and on Saturday will run from around 8.30am to 3pm. The Pro Am on Wednesday 11th September precedes the 3 day event and among the guests playing is BBC Look East’s presenter Stewart White.
In the LETAS Championship, Englishwoman Hayley Davis, with 26,787.5 points, is in the driving seat to win the Road to La Largue and holds a 1,926.5 point advantage over Finland’s Saana Nuutinen.

Davis has earned one victory – at the Bossey Ladies Championship – and posted seven further top 10 finishes so far from 12 appearances this season, but it’s far from out of reach for Nuutinen, as the winner will earn 5000 points.

In winning the Amundi Czech Ladies Challenge for her second LETAS title, Nuutinen came from behind to win by one and the Finn has recorded five further top 10 finishes this season, including a share of second with Davis, Charlotte Thompson and Anais Meysonnier in the recent Tipsport Czech Ladies Open, where they finished a stroke behind Carly Booth.

With 15,000 points still at stake across the final three tournaments, mathematically anyone in the top 14 can still win the Road to La Largue. The top five players – positions currently occupied by Davies, Nuutinen, Laura Gomez Ruiz, Lucrezia Colombotto Rosso and Annelie Sjoholm – will earn membership of the Ladies European Tour for the 2020 season, while players in sixth to 20th positions will head to the Final Stage of Ladies European Tour Qualifying School.

The WPGA International Challenge is one of the most popular tournaments on the LET Access Series and besides the top five on the Road to La Largue rankings, the field includes the defending champion Manon De Roey, 2017 winner Lydia Hall and 2016 winner Natalia Escuriola.

There are 12 amateurs in the field, headlined by England’s Alice Hewson, the European Ladies Amateur Champion, who recently played in the AIG Women’s British Open.
Tour Director Di Barnard commented: “All of the players are thrilled to be returning to Stoke by Nayland. It’s a course they love, the organisers are always extremely welcoming and it’s a great atmosphere. We would like to extend a huge thank you to the venue for their support of the event, which is now in its seventh year.”