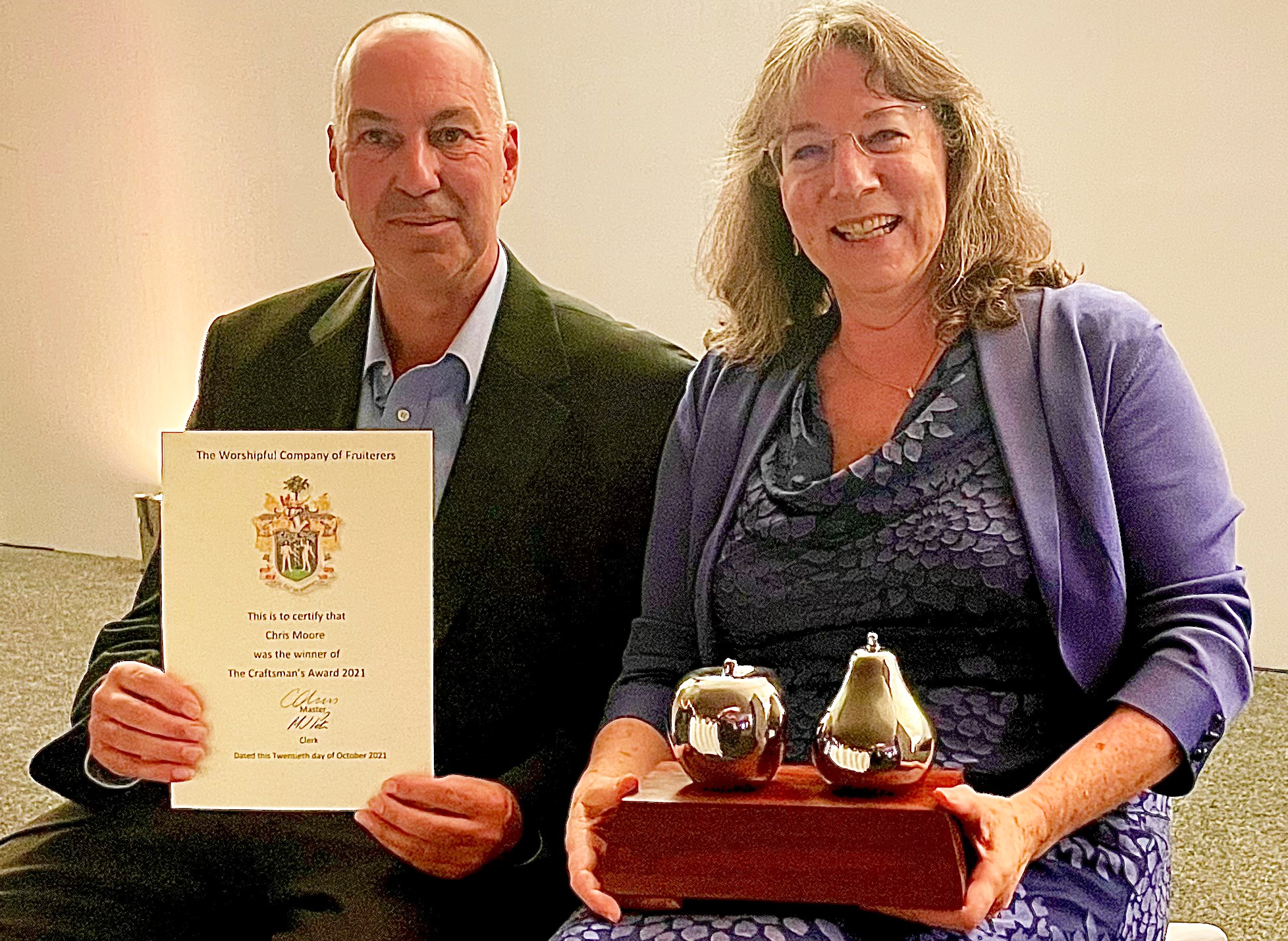 We’re thrilled to congratulate the team at our sister company, Boxford (Suffolk) Farms as they celebrate winning two prestigious awards – presented to Carmella Meyer and Chris Moore at the industry’s National Fruit Show dinner in Kent on 20th October.

Carmella Meyer is one of the family owners and directors of The Boxford Group, which includes Boxford (Suffolk) Farms (which was established in 1938), Peake Fruit packing, storage and marketing business, and the Stoke by Nayland Resort.  She was honored to be the first-ever recipient of the new Jon Jones award which recognizes an individual who has worked consistently for the benefit of the UK fruit industry, and who has both excelled at their day job and also gone above and beyond to ensure fairness in all that they do.

Sarah Calcutt, the Executive Chairman of The Marden Fruit Show Society presented the award, featuring a silver apple and pear, and said “Carmella has worked so hard for the Fruit Industry and was one of our real points of knowledge in the critical negotiations around Producer Organisation Schemes.”

Carmella joined her Peake family business in 1996. Originally a graduate of Agriculture and Forest Sciences at Oxford University, she helped to create a Grower Co-operative Producer Organisation as part of the EU Fresh Fruit & Vegetables Aid Scheme in 1997. In 2004 she was invited to join the board of the Top Fruit Industry Trade Association, British Apples & Pears and is still a director today. Carmella was also appointed a member of the DEFRA/RPA/PO Experts Group representing the Top Fruit Sector in April 2012.

Susanna Rendall, Group MD of The Boxford Group said, “We are really proud of all that Carmella has achieved over the last 25 years for both the fruit industry and for our farming business.  She truly deserves to have her dedication and expertise recognized in this way.”

The Worshipful Company of Fruiterers, a City of London livery company which was founded in the 14th Century, makes annual awards to those in the industry deserving of recognition for their achievements and contribution.  Their Craftsman’s Award was presented to Chris Moore at the National Fruit Show Dinner.

Chris Moore first started working at Boxford (Suffolk) Farms as a 15-year-old school leaver in 1979.  He then completed a 3-year course at Otley College and attended block release courses at the Isle of Ely College in Wisbech, obtaining a City and Guilds Certificate for Soft and Top Fruit Production.

His excellent skills and dedication eventually led to his promotion to Top Fruit Manager on the farm where he is responsible for the staff as well as the extensive acreage of apple and cherry orchards.  Chris has relished the role and has inspired his team with his passion for the work and knowledge of all aspects of fruit growing.

Farms Director, Robert England commented, “For the past 42 years Chris has shown that he is a dedicated true orchard Craftsman who excels in all fruit growing practices – including pruning, spraying, thinning, grafting and harvesting – which has impressed anyone in the industry who meets him.”

Chris oversees the latest technology in automated intelligent irrigation systems which closely matches the needs of the plants, and, with an emphasis on ensuring soil health and biodiversity in the orchards, he has also implemented various strategies such as Predasect insect houses and wildflower nectar mixes for orchard borders.

Alan Griffiths of OrchardWorld, one of the farm’s leading marketing agents commented, “Chris is one of the industry’s most dedicated and loyal servants, who’s love and enthusiasm for what he does is completely undeniable.  Chris is, without doubt, one of this industry’s greatest unsung heroes.”